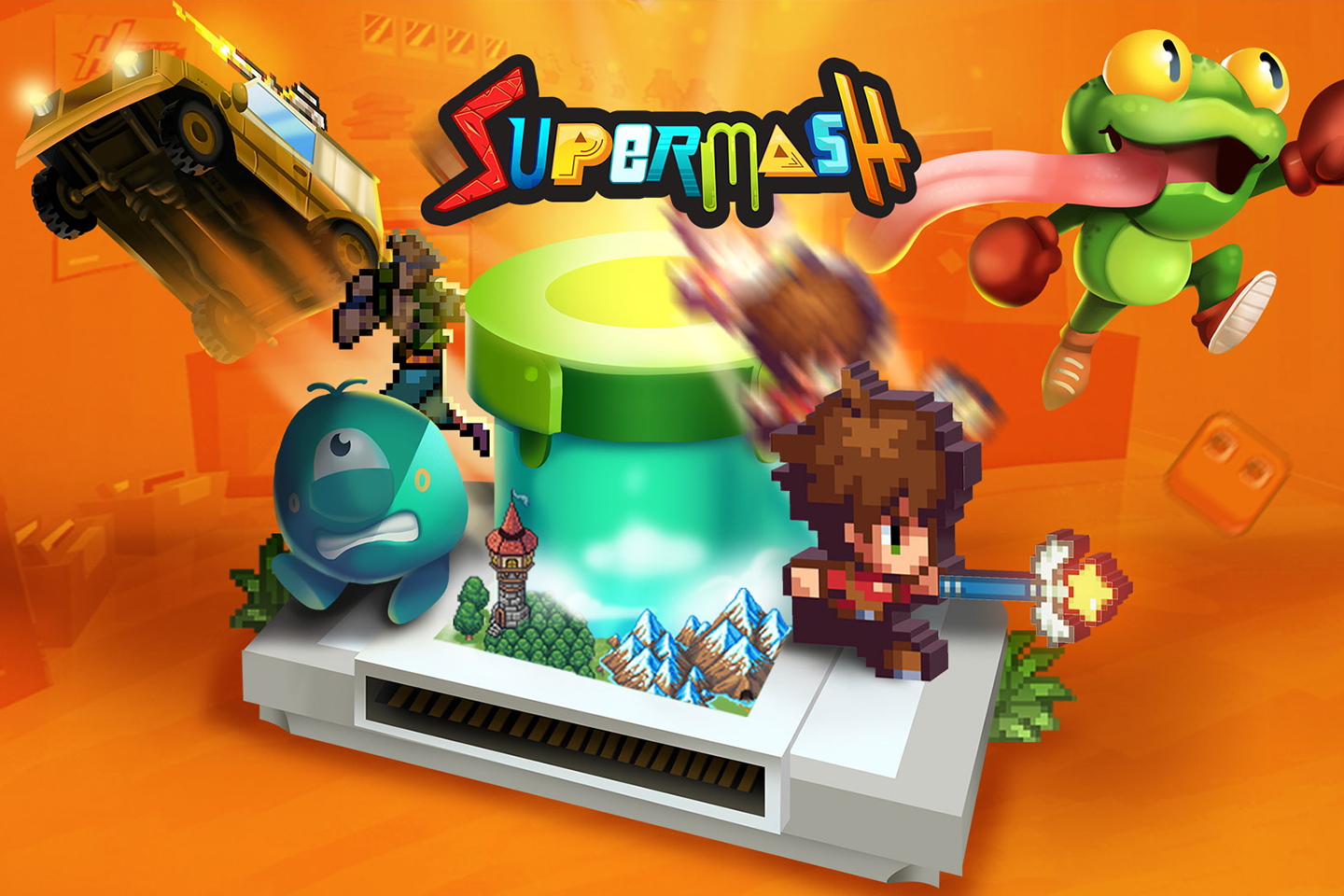 I will always have time for retro games. Whether they’re part of the modern, retro-esque trend (Battle Princess Madelyn, Shakedown Miami, The Messenger) or an actual retro classic on one of my consoles from yesteryear, my love for pixels as well as bleeps and bloops will never wane.

Supermash is a game that carries that same love for retro games, although it doesn’t share that same execution as the classics that inspire it. In case you haven’t heard of it, allow me to explain the basic premise: Supermash is a game about mashing together two genres of retro games (with minor tweaks on occasion) and playing the results. Because Supermash features games made by a machine, it doesn’t share the same logic and therefore design behaviours of a human. “Mashes” as they are called, can be accessible, simple and enjoyable experiences, or they can be glitchy, nonsensical nightmares of code – it’s all up to chance.

Surprisingly, there is a story present in the game, albeit one that is almost completely unnecessary. Tomo and his sister, Jume, run a games shop with the help of their friend, Rob. The shop isn’t performing too well, with Jume and Tomo often searching for rare games at local garage sales. On one fateful afternoon, the two discover the “Mash Machine” at a garage sale, and decide to buy it on a whim. 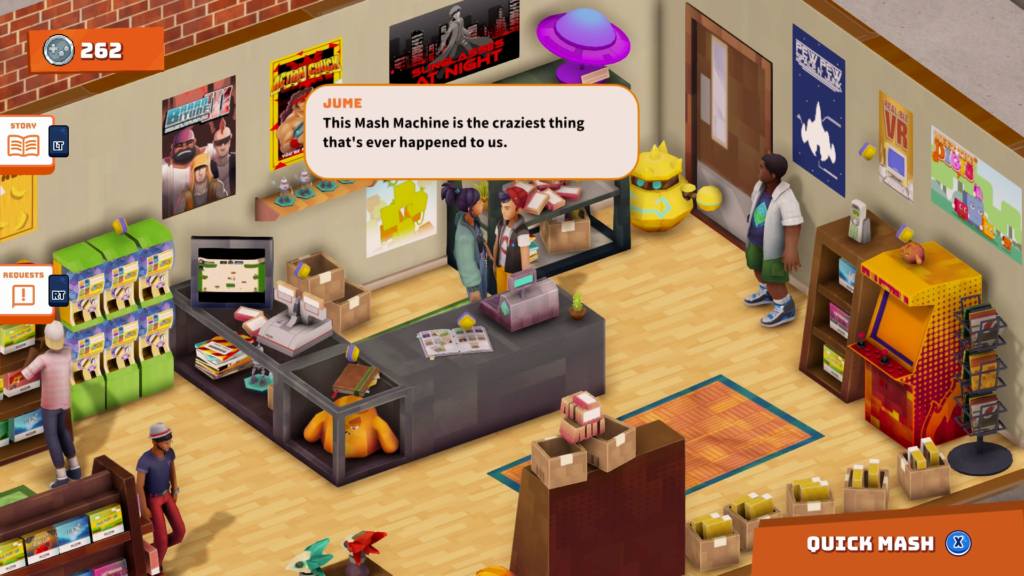 The story is rife with cliché writing. “What happened next would change our lives forever” and similarly overused lines litter the game’s dialogue. It made it extremely hard to care about the characters, and even their plight of running a friendly local games shop was hard to find empathy for. It has all just been said and done before. I’m not saying Supermash’s narrative is of poor quality – I just didn’t care for it.

Players assume the role of Tomo, who chills in his shop not working while his sister sells games. You’re able to walk around, talk to customers, view saved mashes, collected developer cards, and of course, use the Mash Machine. As stated before, the Mash Machine combines two genres of games to create unique gameplay experiences. Players can choose from stealth, shoot-em-up, JRPG, Action-adventure, platformer, and “Metrovania” games (which isn’t about gelled-up vampire slayers, they’re just playing it safe with copyright). You can also customise the game from single-use developer cards unlocked from completing mashes. Love that shotgun from the stealth mash you just made? Use it in a stealth platformer to annihilate those idiot guards. Got a favourite character? Throw them in a mash of your choosing. The dev cards are a nice touch.

I didn’t quite know what to expect when loading up Supermash for the first time. I knew the premise, but was this game going to make a string of micro-games like Warioware, mini-games like Mario Party, or actual full games that utilise the strengths and weaknesses of classic retro game design? Well, it’s none of the above. Instead, Supermash throws single levels and instances at the player, with a set objective and a time limit. For the most part, this works rather well, though you never quite become fully immersed in a game. The plotlines, characters, enemies and sometimes concepts are disposable. Sure, you can save your favourite mashes, but I’ll never know if Mercenary Mongoose actually saves the day.

Okay, so the story is bland, and you don’t actually play anything longer than ten minutes, but does the mash concept actually work? Yes and no. In terms of the experiment (playing games that a machine designs, as opposed to a human developer) Supermash succeeds, although the amount of actual entertainment playing mashes will vary, and it makes the game hard to recommend. I had an absolute blast playing a very Zelda-esque action-adventure game with shmup elements. Seeing a plane swing a sword and shoot arrows against boss aircraft in a dungeon was hilarious. So was shooting Goomba-like cube monsters with a shotgun-wielding protagonist who looked like he was out of Contra. However, I have encountered a lot of games that were extremely difficult (due to being built almost improperly) or flat-out broken.

The game also employs simulated glitches, which were apparently a selling point for a lot of actual retro games. A giant skull can smash into the screen from the background, killing players in a single touch. Other times random fires or ice will spawn, damaging or freezing the player. I played a mash where I wasn’t allowed to take a single hit of damage, and when I performed a certain action, fire would spawn on me. This made the game frustrating, but even more frustrating was the unintentional glitch where I couldn’t finish the mash. Yes, Supermash has real bugs and glitches too. Mix intentional and unintentional glitches together and you’re ready to rage-quit in favour of some actual retro games (I don’t remember Altered Beast being this buggy!)

Do you remember earlier, when I mentioned the “Metrovania” genre, which clearly borrows a lot from Metroid and Castlevania? Supermash dares to tread awfully close to a lot of classic games in a number of ways. All Stealth mashes resemble the Metal Gear games, and nothing else. Platformers are extremely similar to Kirby and Super Mario games. All Shoot-em-ups are identical to the 1942 games. Action-Adventure is, from a legal standpoint, dangerously close to the Legend of Zelda: A Link to the Past. While this tickled me at first, it makes for more original creations, at least from a visual perspective – the copy-pasted gameplay is necessary. Overall though, playing Funky Jumper when you wanted Super Mario Bros 3 is like asking your mother to get you Fruit Loops and she brings back generic “Fruit Rings” instead. You eat them, but you aren’t satisfied. 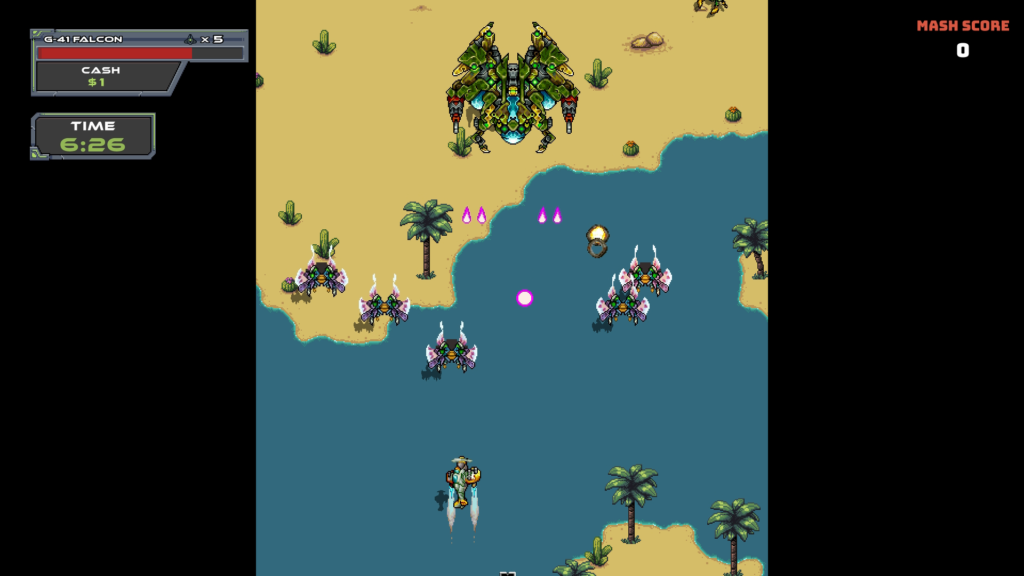 Side note: it’s weird that Supermash borrows a lot from both 8 and 16-bit games. This makes for some awkward graphical juxtapositions. The Mash Machine seems to span multiple console generations, despite being a single machine with two cartridge slots. It would be like adding Duke Nukem 3D into Duck Hunt.

It might sound like I absolutely hate Supermash, and I want to make it clear that I absolutely don’t. After all, we both share the same love of classic retro games and design. This is a stellar concept for a game, but ultimately one that doesn’t meet its potential. The overarching story is boring, the mashes can feel like those infamous Chinese knock-off games, and the whole experience just keeps repeating itself. I can’t think of what would have actually saved Supermash, though – maybe a Mario Party meets WarioWare experience, where speedrunners take part in the ultimate competition – a series of lightning fast retro mash experiences.

Overall, it’s difficult to recommend Supermash. If only I could review games based on their potential and earnest intentions. Maybe pick this up if it goes on sale if you’re a die-hard retro fan. Otherwise, skip it.