On the surface, CARRION seems like yet another throwback metroidvania, albeit one with a novel twist: you get to play as the monster, and not one one of the unlucky goons sent in to capture it.

I should probably begin this review by stating that I wanted to like this game so badly, to the point where I might have thought it was going to be different to what it was. I wasn’t sure how the game was going to challenge me. Will I encounter tanks and choppers? Rival monsters? The trailers made the CARRION beast seem indestructible, hiding some very clever strategy and puzzle mechanics under a visceral veneer.

The game opens with you, the monster, escaping from confinement. Easily escaping your glass case prison, you slither your way through ventilation shafts, pipes and cracks in the walls until you encounter your first humans. The humans underestimated you, thinking you were merely a small, inactive sample of a larger beast. You’ll prove them wrong, consuming them and adding them to your biomass, growing in intelligence and size until you are unstoppable. 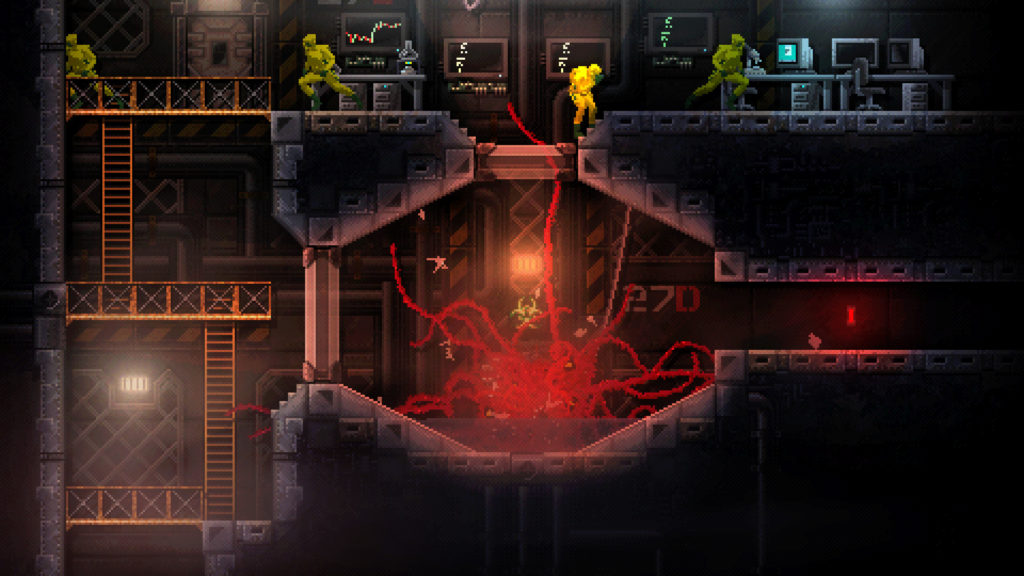 During the early learning stages of the game, humans are no match for you at all. They run, they hide, they scream in horror as you rapidly approach them, multiple tendrils reaching out to eviscerate them. Controlling the beast (which I have affectionately named Carrie) is rather simple. You click and hold the left mouse button to move around, and you click and hold the right to reach out with your tendrils. A combination of both sees you slither about, devouring any human you come into contact with.

There’s something truly enjoyable in CARRION’s movement. It’s so simple, and yet, so accurate. A simple flick and combination of mouse button presses will see you knock down doors, pull vent covers off with ease, eradicate security drones and topple over humans. It compliments the design of Carrie easily, and is unique in the metroidvania landscape. You might not be a stylish as Alucard or The Beheaded, but you are certainly more agile and intimidating.

Once you get your bearings, you’ll begin to encounter stronger, armoured humans. These elite security personnel have electric shields, blocking a front-on assault. Worse yet, they have flamethrowers, and you are very, very flammable. Thankfully there are various air vents, grates on the floor, and bodies of water to quench any fire. With some outside-of-the-box thinking (and a little luck) you’ll live to eat another scientist. You can’t eat the mercs though, as they are too heavily armoured. This is clever in that it means you will die if you sustain too much damage, whereas your normal, pistol-wielding scientists and staff can be eaten to recover health and biomass – you’ll need to approach the more elite humans with strategy in mind. 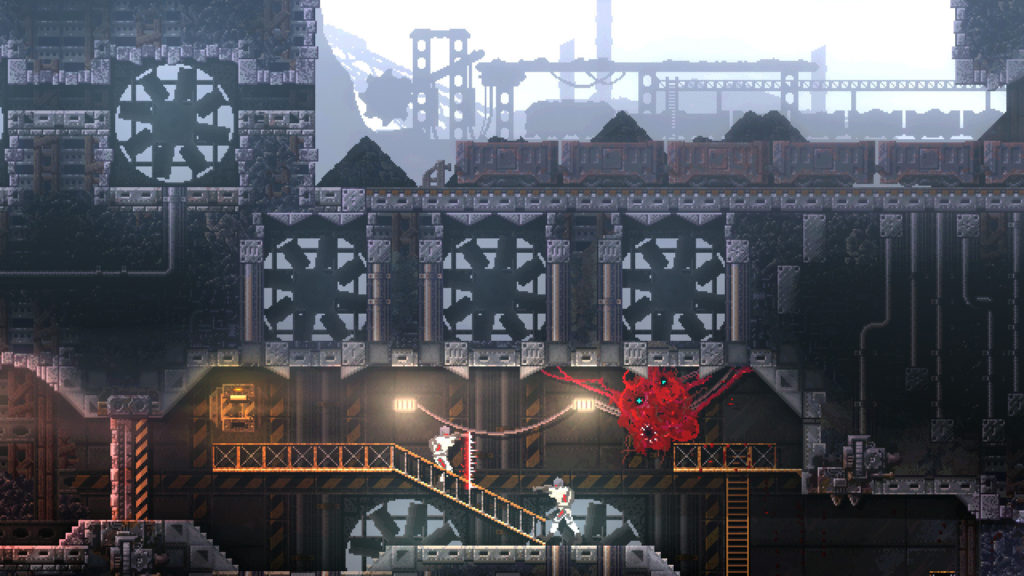 Soon after encountering the inedible humans, CARRION introduces its puzzle mechanics. The majority of the time, you’ll be trying to figure out how to open a locked door, or reach a specific passage. These begin as short, clever affairs, and as a way to introduce you to various mutations you will acquire by sampling other DNA specimens those stupid humans have left laying around in unprotected jars. One of the early mutations is the ability to shoot a web, trapping humans but also tripping switches that would otherwise be out of reach. You’ll also unlock the ability to smash through wooden barricades, which doubles as a handy charging attack.

The problem with these puzzles is they often don’t introduce game mechanics in a way that is obvious. Mutations can be locked to your current health (and size) so you’ll have to dump half your biomass in an amniotic fluid-like pool nearby. Yes, it is refreshing that CARRION doesn’t always hold the player’s hand, but there are times where if you simply knew one little factoid, you wouldn’t run around an area re-tracing your steps for ten minutes, thinking you’ve missed something.

Other times, the solution to these puzzles is immediately obvious – the solution simply requires some backtracking. “Oh, I am too big to use my invisibility cloak ability, I’ll have to go back through this vent, dump half my mass in a pool, go all the way back to the electric panel and recharge, then go all the way back around the other way, shoot a web to hit a switch, go back to the pool, recover my mass, smash through the barricade, then dump it again to go invisble and pass through the laser grid.” It. Is. Tiresome. 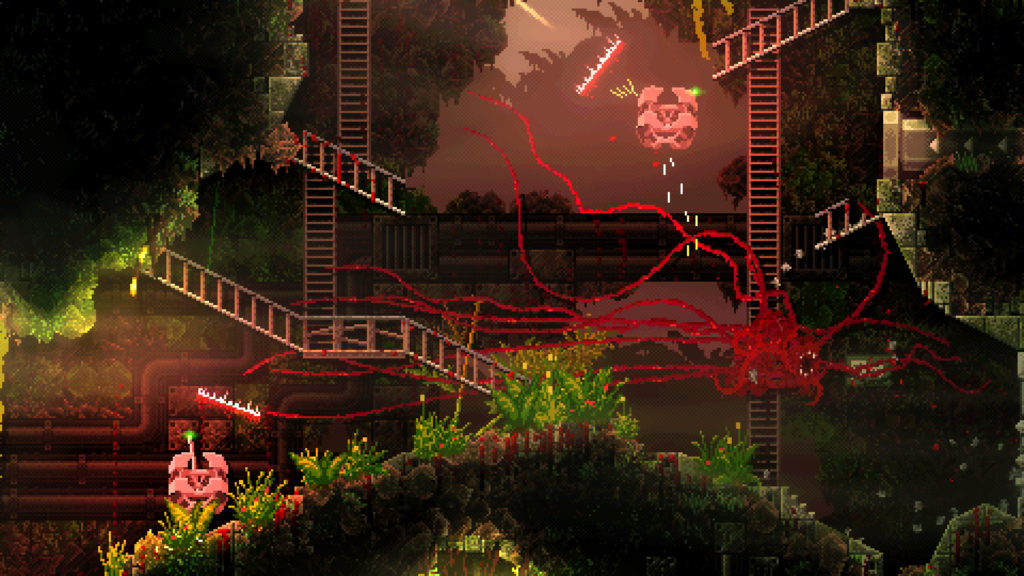 Despite these annoyances, I’ve enjoyed my time with CARRION, and we are indeed to be able to play a game like this in 2020, when monster movies are far from mainstream cinema, and body horror even less so. Somehow, this love letter to Alien, The Thing, and other cult classics has managed to be developed and released, something I’m truly grateful for. The combat never gets old, and even when you have to go back and replay a section because you died, you get to mutilate people all over again. Do you drop a vent cover on someone, thrash them to a pulp with your tentacles, or pick off a group one by one, reliving your favourite scenes from horror movies? It’s something I literally never tire of.

So while I am seeing a lot of other reviews state CARRION is perfect, I have to disagree, though I will say it is a must-play for horror fans, retro fans and fans of metrovania titles. If you are tired of the same old thing, give being the monster a go in this fantastic, blood-soaked game. You won’t regret it.

A fantastic reverse horror metroidvania. Being the monster is a blast and a must-play for fans of the genre(s).