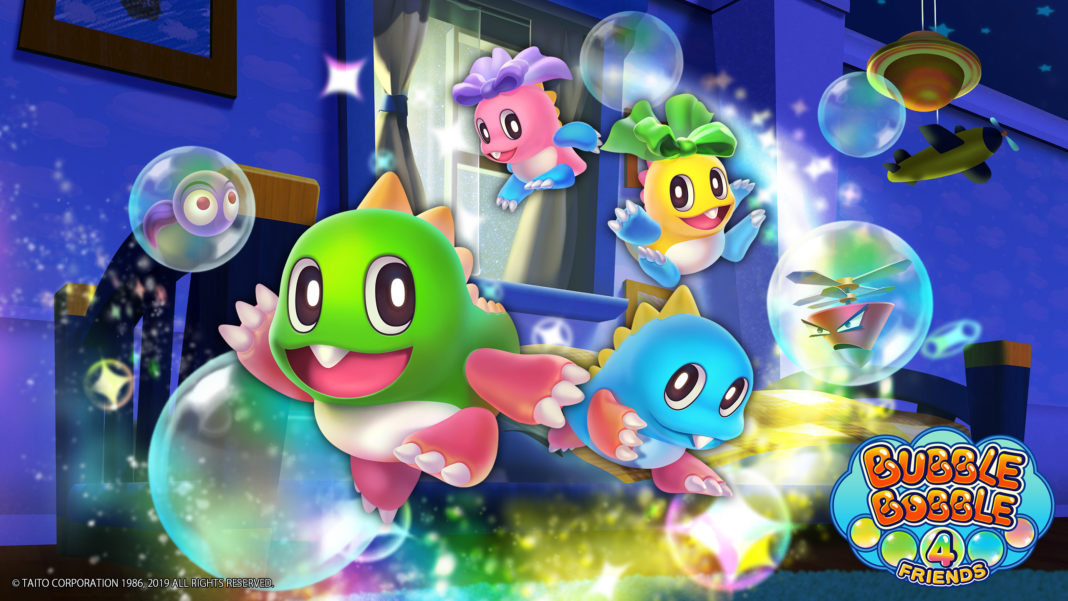 My relationship with Taito’s Bubble Bobble series goes back to the early 1990s, when it was ported to the Sega Master System. I spent innumerable hours trying to complete the game with my older brother, though I’m unsure of if we actually managed to finish it as it had 100 levels. 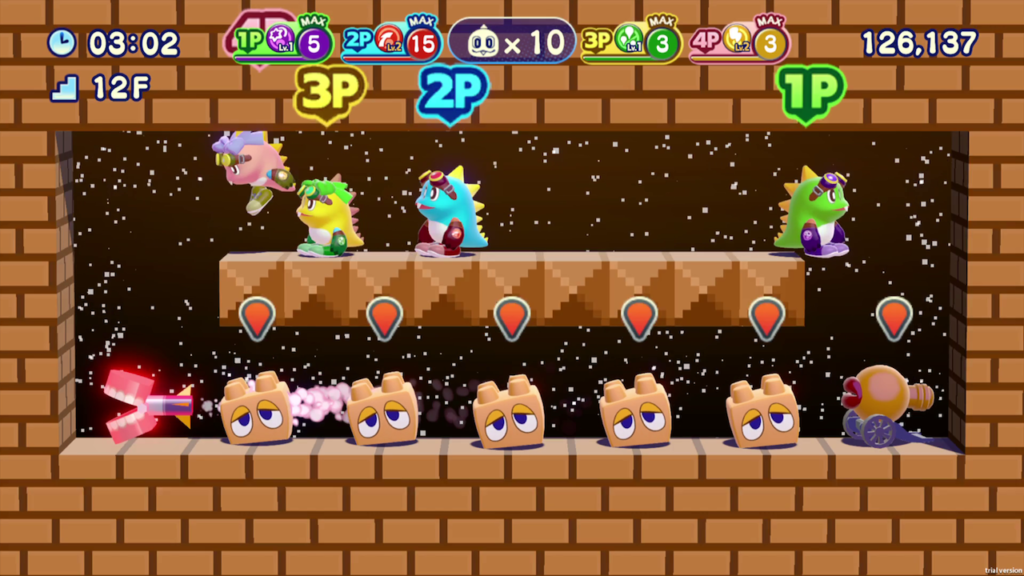 If there’s one thing you can say about the Bubble Bobble games, it’s that its developers weren’t content to rest on the original game’s laurels. Bubble Bobble has gone through many hands throughout the years, each iteration of the game wanting to achieve a different vision for the game. Some have been great, others have been odd, and a couple were even disastrously bad.

Straight off the bat, I’m thankful for art direction in BB4F, as Bub and Bob definitely resemble their 1986 original models. We’ve seen some truly ugly spins on the popular bubble-blowing dragons in the past, and I’m glad we were able to dodge that bubble. The charming classic theme tune for Bubble Bobble also makes a return, though it isn’t repeated ad nauseum like in some Bubble Bobble titles. 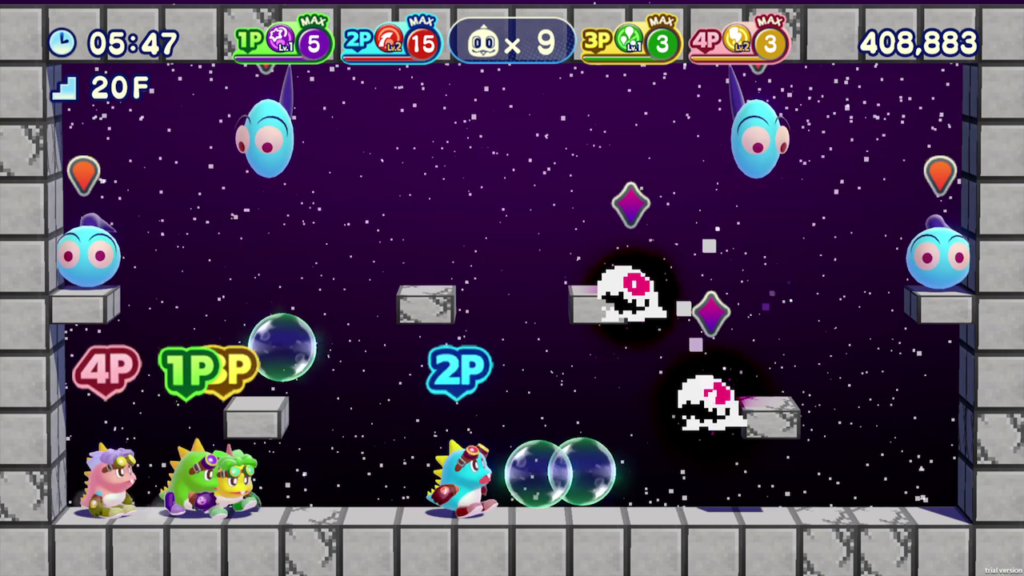 If you’re new to Bubble Bobble gameplay, allow me to introduce you to it: players take on the roles of Bub and Bob, two bubble-blowing dragons. You’ll navigate through a series of basic platforming levels, trapping baddies in your bubbles and then bursting those bubbles to defeat said baddies. Finish them all off and you’re rewarded with fruit to collect, gaining valuable points. It’s a basic-but-fun premise that has remained popular with gamers for over 30 years.

BB4F takes that gameplay, and expands upon it with new features. Firstly, there is the obvious addition of four-player co-op, allowing you to tackle the game’s campaign with up to 3 friends. Things can get pretty hectic when there are other players in addition to all the busyness that is happening on screen, but the game is best experienced with at least one other player – it’s Bubble Bobble, after all!

Throughout the game’s campaign, you’ll encounter a number of bosses. When you defeat them, you’ll unlock new abilities that will assist you in a number of ways. One ability shoots a bubble for a much longer distance, one stops the air currents that move bubbles around, and another allows the player to briefly dash through enemies. These abilities feel right at home, and not at all as though they are too weak or too overpowered – balance is maintained within the gameplay. 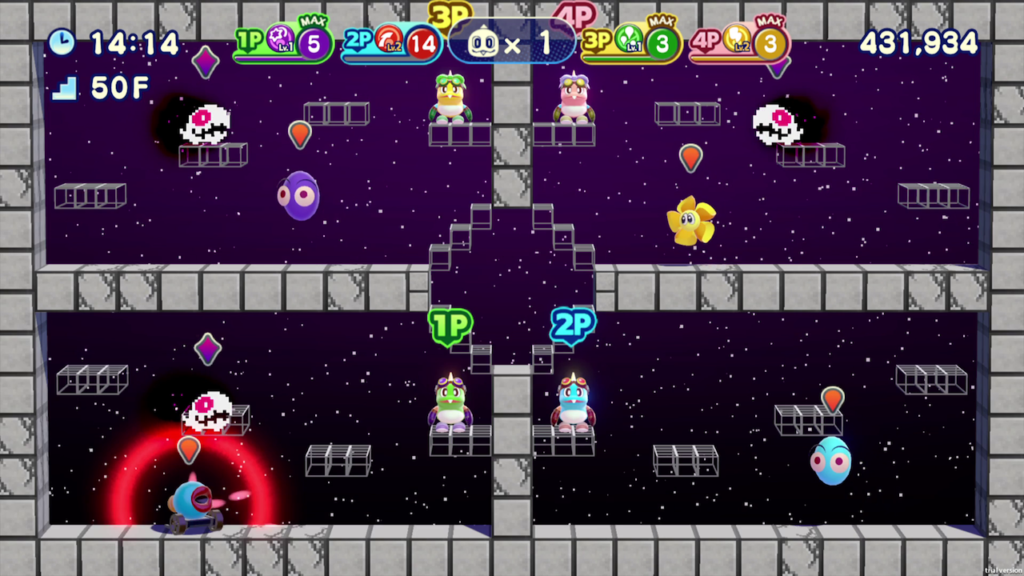 While I enjoy BB4F for the most part it isn’t a perfect game. I find the entire setup to the game to be cute, but ultimately extremely shallow. Bub and Bob are stuffed toys brought to life in a child’s bedroom. They go through each of the game’s levels, with the background for each level featuring a different part of the bedroom. At the end of the game (SPOILER ALERT, I GUESS) Bub and Bob defeat the final boss, Bonner, who is floating away in a bubble. The bedroom is a complete mess after Bub and Bob’s adventure. Bub and Bob grab Bonner’s hand, pulling him back to the ground. Bonner, Bub and Bob have a weird little back and forth, until Bonner waves his magic staff, causing magic to lift all the items in the bedroom up, putting them back where they belong in a tidy fashion. The child is still asleep in their bed, with the dragons and Bonner turned into plush toys on their bed.

I’m sure the game’s “narrative” might have been enjoyable had anyone actually gave a damn in its conception, execution, or both, but it all felt so incredibly dated and shiftless. The cutscenes look like they came from the PlayStation One era, and there’s no speech or text. Forgive me for foolishly hoping for depth in a puzzle arcade game series from the 1980’s, but the original Bubble Bobble actually has an interesting story. Bub and Bob were actually once human, and have been cursed to take on the forms of dragons. Their girlfriends are kidnapped, and they have to overcome their new dragon forms to defeat the baddies and rescue them. I would have been more satisfied with those cute character introductions from the Bust a Move series. 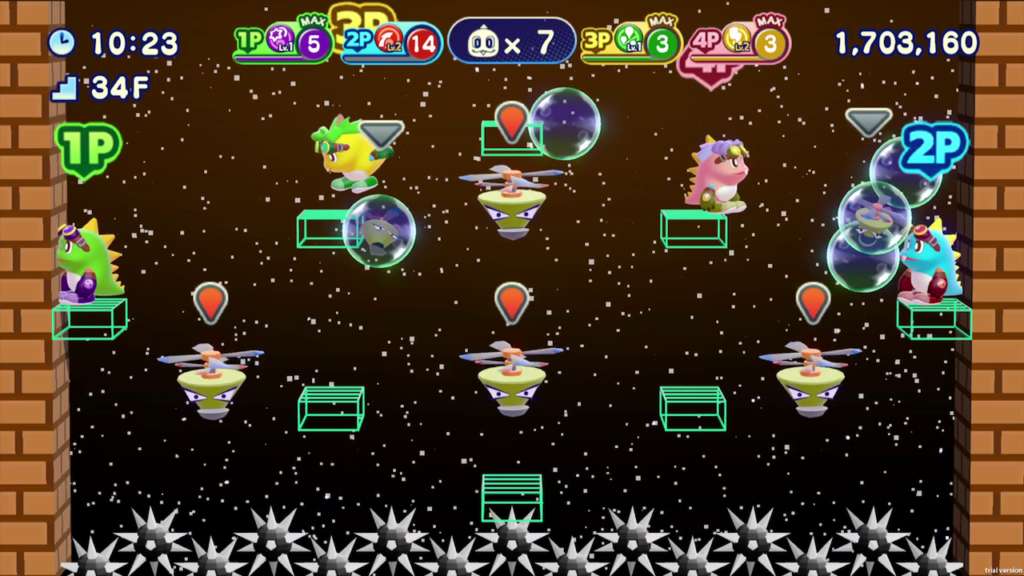 Another aspect of the game that irritates is the level design. While you could argue that early Bubble Bobble games were too basic with their levels, BB4F can be an absolute mess at times. One-way floors that you can jump through but can’t fall through, one-way walls that you can walk through in one direction but not the other, and those air currents. Those goddam air currents.

The air currents I am referring to are a major part of Bubble Bobble‘s gameplay. The bubbles you blow will travel along them in a certain direction. Sometimes you can use them to access hard to reach areas by bouncing on bubbles, other times they will take an enemy you need to pop away from you, forcing you to navigate through one-way areas and possibly into the path of hazards. The function of the currents isn’t annoying, but their visuals are. There are times where you have a dozen enemies on screen, moving platforms, air currents, and a crazy zoomed out camera. It’s like playing a platformer with silverfish in your eyeballs. 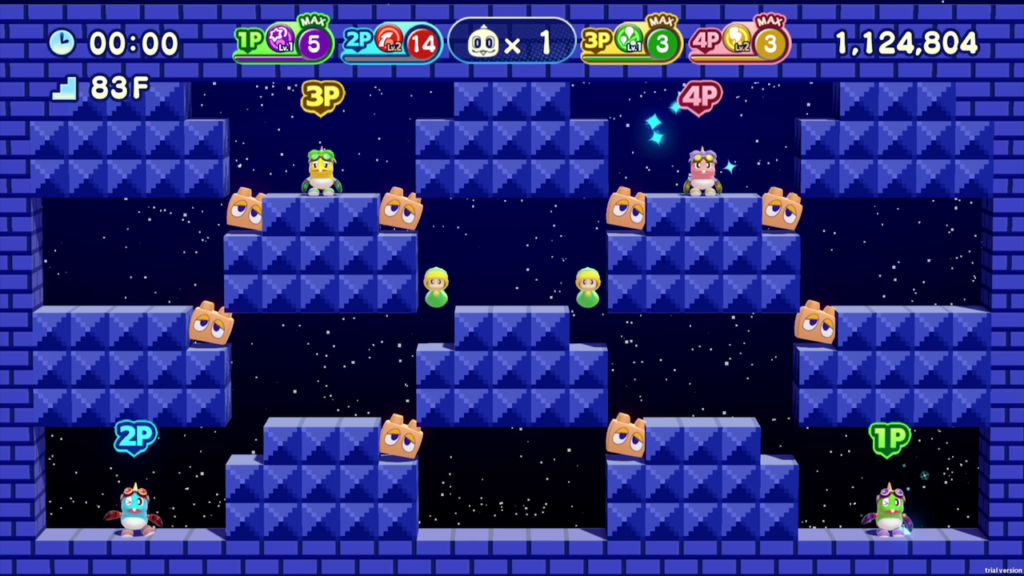 Still, my experience with BB4F has been a largely positive romp down memory lane, reminding me of why I fell in love with the series in the first place. I do feel that it’s price point of $60+ AUD is a little steep (especially as I managed to absolutely fly through all 200 levels in one weekend) but there’s no denying the game’s charm and simplistic fun. It’s highly accessible, and Taito have managed to get the series back on track just in time for those who enjoyed the game as kids to play it with kids of their own. Definitely check it out if you’re a series fan.

Bubble Bobble 4 Friends: The Baron is Back is a terrific addition to the BB series, despite some minor issues. It’s undeniably fun, though its appeal may only reach retro gamers and long-time fans of the series.