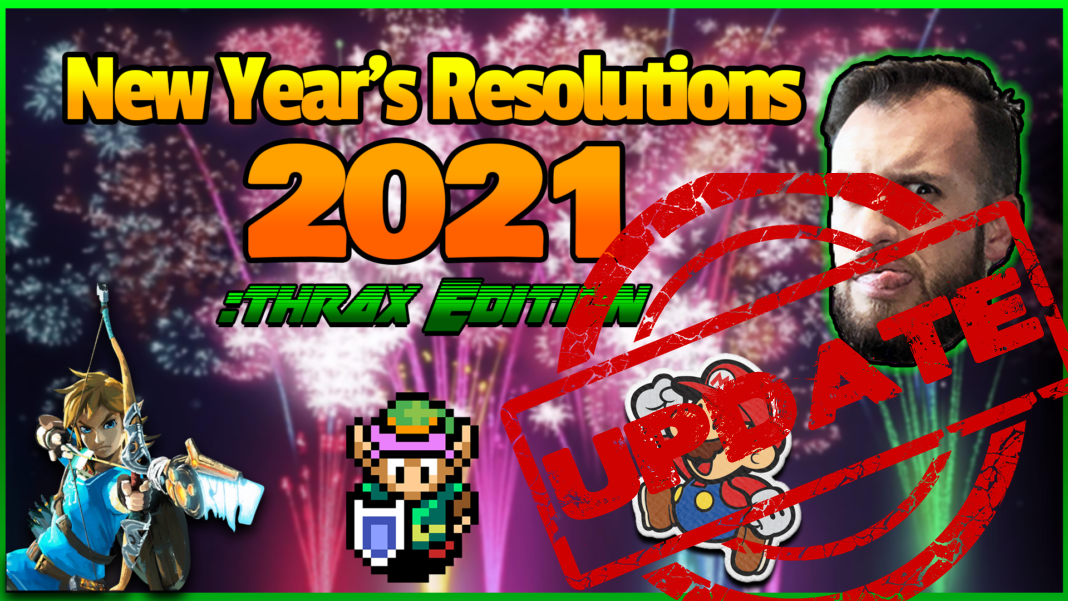 It’s hard to believe a whole year has gone past since I wrote my list of games I wanted to play through in 2021, but here we are. My original post can be found right here in case you’re curious. I wasn’t sure I’d even remember this list in 12 months but I have actually made a concentrated effort over the last 12 months to ‘game with goals’ rather than mindlessly spend time clicking buttons and the result turned out to be so much more than I expected.

I’ll write another post in the coming days on exactly which games I played throughout the year, and likely another for 2022’s resolutions. Something will mention here is that since I had a more organized approach to what I wanted to achieve it reduced my wasted time trying to decide what to play, and while I didn’t play everything (as you’ll soon see) I set out to I did make the most of my available gaming time. So here we go, my recorded progress on each of my 2021 gaming resolutions.

15The Legend of Zelda: A Link To The Past

No better way to come straight out of the blocks for a year of gaming then with an old classic. I’ve known my way through ALTTP since I was a boy and have played it every few years since then so this was a trip down memory lane more than anything. I did spice it up by linking up my Retroachievements account and knocking out 55/55 achievements which was topping on the cake of a great playthrough that only took a couple of days.

I loved my first time playing Sticker Star a few years ago, and figured it was time to go through it again. It can be a challenging game and like most Paper Mario games it’s more about strategy mixed with platforming than straight up skill, they’re not exactly the type of games you can do damageless or with great speed. As I did with ALTTP I played this one through to 100% (though the metric is purely within the save file when you look at the in-game museum to see you’ve collected every enemy and sticker, etc). Playing through Sticker Star a second time was even more enjoyable than the first.

13The Legend of Zelda: Spirit Tracks

I definitely fell short on Spirit Tracks, but I’m mostly putting it down to not thinking it through properly. Firstly I really don’t like playing on DS because it’s uncomfortable with big hands, which leaves me emulating. Emulation through RetroArch (my main emulator, with retro achievements) is absolute dogs balls.. and while I did start playing on a standalone emulator that ran it well, I was both missing the achievement aspect AND realised that playing a game designed for 100% stylus use with a mouse is…. shit.

Running the L4D series just did not happen, and likely won’t. The games are honestly boring and slow if you’re not playing Versus mode, and they’re too old / dead communities to get competitive versus teams lined up at a moment notice. This was a fail but it did highlight to me that the L4D glory days are far enough gone that I don’t need to keep the titles installed anymore.

I was hoping to squeeze in FF8 prior to years end but just couldn’t get there. It actually took me a long time to even attempt to restart this game (I’d played around 6-7 hours previously) and when I did I really had to push to try and get through it. It’s slow, complicated, and an absolute fucking DRAG.

I’m currently at ‘end game’ where I need to (actually, want to) run around doing side quests and beefing up characters before going into the final sequence to complete to game. Some parts have been ok and I absolutely want to go for as many Steam achievements as I can in one playthrough, but once I’m done there’s almost no chance I’ll ever play through this train wreck again.

I attempted to play FF3 in 2021, but sadly only sunk around 8 hours into it as I got wrapped up in other games not on this list. Since last playing it, it has received a free update to ‘3D Remake’ version so when I do get back to it I’m expecting it to look a little different. I’m undecided if I’ll keep this on my list for 2022 as it took me some time to get into the whole ‘jobs’ mechanic, but overall the opening of the game has been quite good.

Something I found a bit of a passion for this last year that I’ve never felt before is achievement hunting. I’ve found myself wanting (without going overboard mostly) to not only play through games but ‘perfect’ them on either Steam or RetroAchievements. Why am I putting this information here? Because I realised that The Last Remnant is old enough that is doesn’t have any Steam achievements and by the time I went to play it, this was enough for me to lose motivation.

Not saying I’ll never play it… but right now it’s off the list.

8The Legend of Zelda: Ocarina of Time

Finally, another success! I did play through OOT (even did a couple of short vids trying out an idea I had…) through to completion and ended up with 76/97 RetroAchievements completed. I didn’t go all the way with these as the missed achievements are largely around NPC manipulation or defeating bosses with only 3 hearts, none of which I felt the need to grind out.

As always OOT is a pleasure to play and beautiful game, this may be my last replay for a while but no doubt I will pick it up against once my son can handle the movement/camera to give it a go.

7We Were Here Together

We Were Here Together was not only a pleasure to play through, but it was really the main bulk of gaming that Nick and I have sat down to do together (and on Stream). It was tough in places, but getting through challenges together was just great. Good wholesome fun with a great guy.

I wouldn’t mind replaying it as ‘the other person’ as I only got 14/22 achievements the first time through, but that’s more just hunting those sweet cheevo’s and not an item for a future resolutions list!

6Lands of Lore: The Throne of Chaos

Sadly this one is an outright fail. With no achievements and still fuming from my last attempted play through where I soft-locked the game, I couldn’t muster up the motivation to give this one another try in 2021. It shall remain on the shelf as while longer.

I am proud as hell of this one. Not only did I beat this GEM of a game (seriously, it’s really good and the dialogue is amazing) in 2021, but a few weeks after I completed it my son decided he wanted to play it and didn’t like my save file because ‘there was nothing to do’. So I can attribute this game with being the catalyst to create my son his own profile on my Nintendo Switch!

Being a 6 year old the boss fight mechanics were too much for him, but the rest of the game was both a bonding and learning experience as he learned the ring system (fights) and followed every bit of the story as I sat and narrated the 40+ hours for him. Everyone has fond memories of some of their first games and even though he’s played a good few before I’m sure he will remember this one vividly for a long time. As far as this list goes I managed to beat The Origami King twice in 2021, and 100% it as well.. time well spent!

I actually started Cat Quest II but made it barely more than an hour in before I got sick of it. While I loved the first game in the series it just felt like the second installment was just more of the same, and investing the time to get deeper into it and see how it varied was just not something I could be bothered doing last year.

No regrets though… but I think this can go back on the shelf for while.

3The Legend of Zelda: Breath of the Wild

Breath of the Wild is ‘probably’ my biggest gaming regret of 2021, in that I didn’t load it up even once. I still have a decent amount of enthusiasm for it so look out for it on 2022’s resolutions list!

Well I at least started on what I said I wanted to accomplish here! Me and Mattao teamed up and ran Halo 1 to completion, so that’s something. I think listing the whole MCC was… not thought out properly. I’ll have to consider if I put Halo 2 on the list for 2022 or not… playing co-op is good fun but we really got back into PUBG in 2021 and it soaked up almost all of the time that we played games together.

I waited on B4B with baited breath and cautiously held back from pre-ordering as I’ve been stung before paying high prices for great looking games that turn out to be dead on arrival, and that’s exactly what this turned out to be. I held off until the game was fully released and watch friends play it in groups, stream it, chat about it in Discord etc and all the feedback was the same.. “they just remade L4D, but it’s not as good”.

As you might see L4D was also on this list, along with the conclusion I came to around that franchise. So this one got scratched at the gate, as I didn’t actually own the game and decided against it once it was released, no play, and a fail on this list.

Goodbye Gulag, Warzone’s Stimulus Solos Should be the New Norm

How to Cull Your Own Franchise from Existence