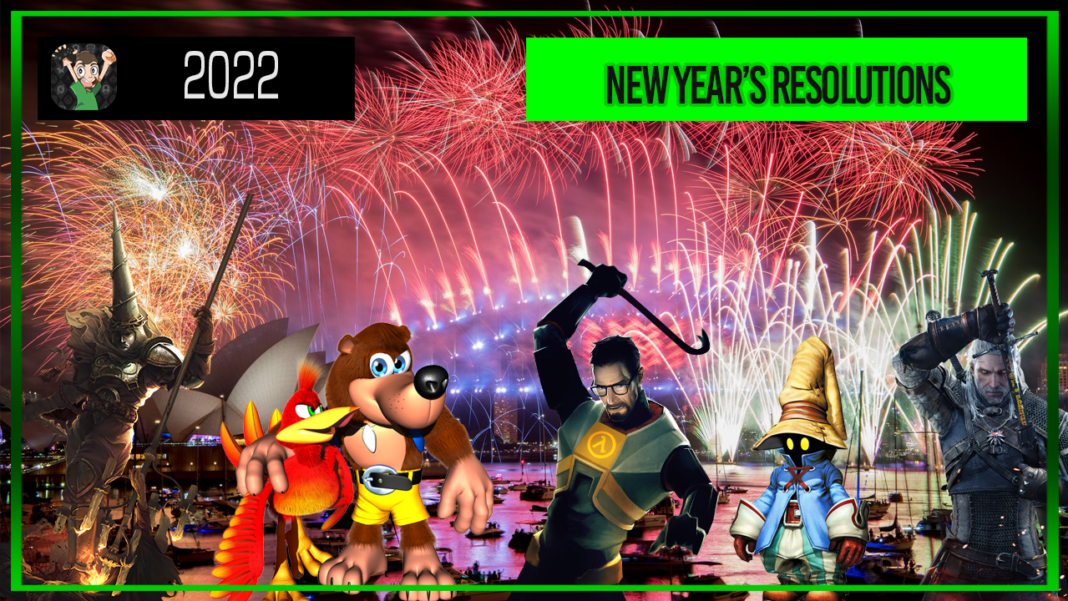 2021 saw me approach gaming in a much more organized fashion than ever before, and I feel like it was the most ‘productive’ year yet for my past time, despite barely ever touching this site. I originally set out with the gaming resolutions for a bit of content but found that it drove a good part of my decision making process when looking for something new to play. It also lead me down the path of achievement hunting and to a number of really fun games that I otherwise may not have touched.

This year my gaming is a bit more defined, and I’ve got the hindsight of doing this once before. So with (a bit more..) careful consideration, here are my gaming goals to accomplish in 2022. Keep in mind the list scrolls sideways, so use the arrows next to the heading to see more content.

Have you got any games that you’ve wanted to play or finish for years and never seem to get around to playing them? Jump on Discord with us and let us know!

The O.G. Alex Kidd is a game everyone my age knows. It was built in to the AU SEGA Master System II consoles and you’ll be hard pressed to find anyone that played this game that doesn’t have great memories of it.

For me it’s a game I’ve NEVER completed but consistently go back to for nostalgia before I realise that it’s not all that easy and move onto to something else shortly after. Well after 35’ish years I’m finally going to give it a crack to see it all the way through.

I remember the first time I finished the original Legend of Zelda (which wasn’t all that many years ago to be honest), and absolutely loved it from start to finish. Having a good idea how long it might take and knowing I’ve done it before, this year is the time for me to re-run it, earn some retro achievements and re-live the magic as a casual play in between some of the meatier undertakings on this list.

I’ve never been a fan of Banjo-Kazooie, never really played any of them and always viewed them as inferior to SM64 and to be honest if it wasn’t for my wife I’d likely still view them that way. However as a child the original Banjo title was one of my wife’s favourite games and she has recently got our son into it via Rare Replay on Xbox One.

Watching and sometimes trying to help the little man with Banjo-Kazooie has made me want to play it through for the experience, but it’s unlikely that I’ll wrestle him of the xb1 to start my own file anytime soon.. so I’ll likely go the retro achievements route and see how close to 100% I can get.

Me and the original Paper Mario have some unfinished business, being that I haven’t finished the game yet… however I think in all my re-jigging I’ve lost my save file so it’s back to go for me. From what I remember the first entry into the series is fairly slow and drags on a bit, but I’ve found that the Paper Mario series has become one of my most beloved so it’s only right I go and finish off the original.

Scaling back my ambitions to play the entire MCC last year, this year I’m aiming lower and just to push through the second game in the series and where I’m currently upto. This is going to be a co-op effort though as I find single-player Halo as boring as watching paint dry.

Truth be told despite being a life-long Valve fanboy and racking up hundreds and hundreds of hours on most of their titles, I’ve never completed the single-player story modes of Half-Life or Half-Life 2. SHAME.

I learned in 2021 that I quite enjoy racking up achievements as I play games and HL is of a vintage before the great age of achievements, so HL2 gets the call up on this years gaming resolutions.

The second entry on this list that I intend to be a joint-venture and the predecessor to We Were Here Together (which I played through last year with Nickbait), We Were Here is another first entry in series that I got into later on. Hopefully it’s not quite so hard, as We Were Here Together had some real tough ones that teetered too close to ridiculous rather than challenging fun.

I picked up Underhero when randomly clicking through my Steam library looking for something to start and found myself hooked by it simplicity and fun vibe. I’ve let it sit long enough now that I have no idea where I’m upto… but this year it’s on the list to get back into, figure out where I left it, and finish the game through to the end.

When I first picked up Team17’s Blasphemous I instantly fell in love with it. The themes, the level design, the mechanics, the collectables, the story, etc… I played it a bunch relentlessly right up until a boss that I just couldn’t defeat. Sadly I think I’m actually not too far from the end of the game but my save file has just sat their dormant since failing to defeat the boss about 50 times in a row.

In 2022 I’m going to beat that motherfucker, and finish the epic quest of the penitent one.

This relatively new game came highly recommended as  something the wife and I should play through together. Previously we’ve completely a few games together like Diablo 3, Overcooked! 1, and Overcooked! 2 and while I love a good co-op game there’s only the odd one or two that i’ll take on with my (non gamer) wife).

The trailer for this game looks quirky and fun, and as I mentioned it came highly recommended so let’s see if we can get through it!

I every-so-briefly started playing A Way Out with the wife a few years ago on xb1, but it just wasn’t her thing. Well this year I’ve re-purchased it on PC with plans to play it with my regular gaming partner in crime. It’s interested me for a long time so hopefully this time around I can get through it.

Like many, MANY geeks in the modern die I have binged each season of The Witcher on Netflix as soon as they’ve become available. Loving RPG’s like I do I figured I would give it a go and see how it sits with me. I adored the original Dragon Age and am frequently found within a JRPG world of one sort or another. Looking forward to seeing it this gem holds up to the hype.

After having a fair portion of 2020 slamming FF7 and FF7:R, and then putting hours into FF8 at the back end of 2021, I’m near enough to completing that saga that it’s time to list the next one. Unlikely FF8, at no time previously have I ever even loaded FF9. I can’t recall ever seeing any real marketing for it, gameplay videos, nothing… I’ve heard it was a damn good game from places like Reddit and word of mouth, but this year I’m going to get stuck in and find out for myself.