While playing through my 2021 gaming resolutions I occasionally took a break to try out another game here and there and in June I started playing Cyber Hook after getting it back in the March 2021 Humble Bundle. Without reading into it I initially installed it thinking it would be a funky neon throwback to Quake style FPS’s, but found out right from the get-go that I was… well, wrong. If I had to describe it quickly I would tell you it’s a crazy mix of parkour, a grappling hook, and Quake movement; set out in in what are effectively short levels of obstacle courses with an emphasis on going fast.

It’s a bit of a wild and crazy ride and can turn from extremely gratifying fun to intensely rage-inducing frustration from level to level depending on what your strengths are. Personally my play style was a lot more ‘Spider-Man’ style with long sweeping swings from huge angles before building up speed on flat surfaces. When it came to later levels that all but required the use of the “slow down time” mechanic and precise grapple shots mix with in-air physics manipulation, I struggled. So much so that some levels took me 100+ attempts, but I got there. I did put in the work enough to perfect the Steam achievements which I was proud about, however I may be up for a re-visit soon enough with a DLC on the way very soon.

Before I jump into the review proper, I will mention that Cyber Hook is developed by Blazing Stick and published by Graffiti Games,and released on September 25 2020. Side note: Graffiti Games are fast becoming a publisher to watch, already boasting an array of titles like Blue Fire (which I’ll be reviewing in the coming weeks as I played it though 2021 as well), The King’s Bird, and Turnip Boy Commits Tax Evasion (both likely to be on my 2022 Gaming Resolutions list). Now let’s have a look at the breakdown of elements that make up the experience that is Cyber Hook. 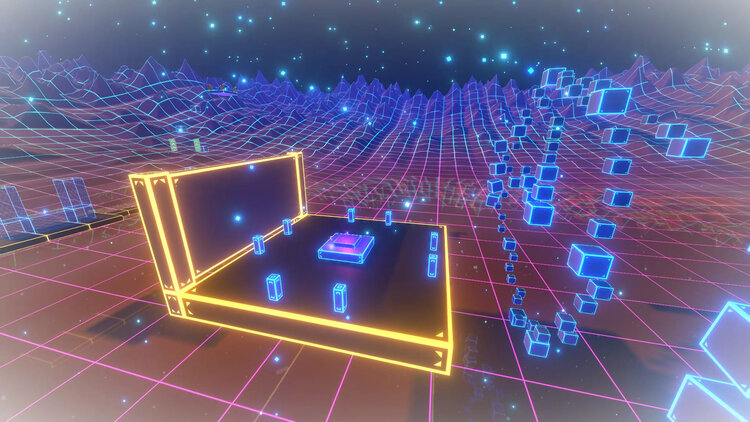 Set to what can only be described as ‘that neon retro background’ that is seemingly used every these days (including the colours on this site, and the actual background on our Twitch streams!), Cyber Hooks graphics are rudimentary but wonderfully done. There is no floor as each level is made up of floating platforms and blocks over an abyss. The various blocks that make up the level are colour coded to suit their purpose, such as blue for normal, black (with yellow outline) as being able to wall-run, green can be shot to clear the way, etc. Such a basic and rudimentary system that does exactly what it’s designed to do with a splash of style and no frills.

The framerate holds up wonderfully given the low system requirements, and while the motion blur can really be distracting at high speeds it also does it’s job well. Immersing you in tunnel vision when you’re really moving which increases the difficulty and lowers visibility, as it should! 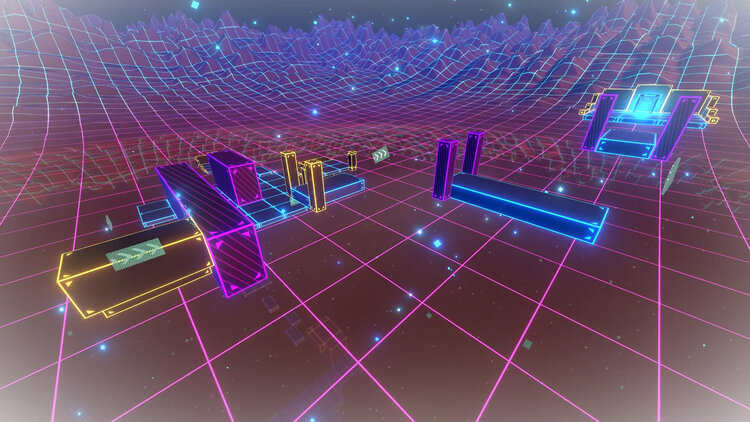 Look, the soundtrack in Cyber Hook isn’t going to be flying up the top 40 charts anytime soon, or ever… but it serves it’s purpose well without being jarring, unlikable or horribly imbalanced. One of the more refreshing things about Cyber Hook (and be extension it’s audio…) is that you can happily play it for hours listening to the audio, or not. There’s no required audio queues for gameplay so you can sit back and play to the chilled out tunes and effects in-game or just mute it and throw on your favourite bangers while you work your way through. 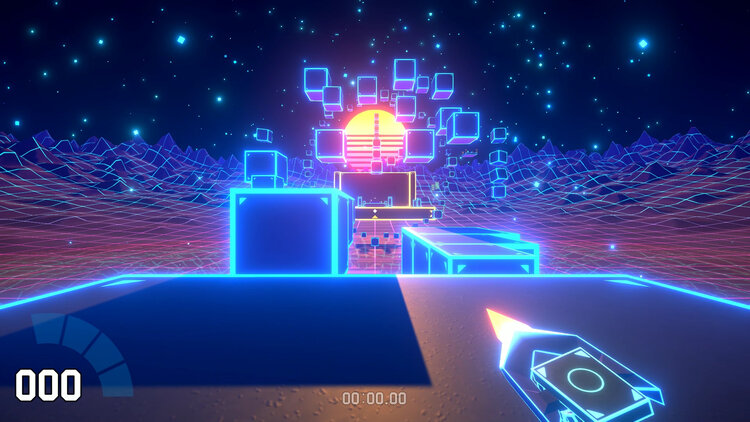 Controls in Cyber Hook are extremely easy, so simple in design that they work perfectly and fit the games overall tone to a tee. Being a parkour/movement/physics based game all you need is the standard fare of WASD, SPACE, MOUSE1 and MOUSE2. That’s it, easy. All movement mechanics are catered for within the 7 keys, but like they are easy to learn and difficult to master. There is a variety of mechanics beyond basic movement such as a ‘gun’ to shoot blocks, retracting the Cyber Hook to reduce distance from your anchor point, and even running on a flat surface yields a different result for your movement then swinging. In all the controls are perfectly simple and elegant. 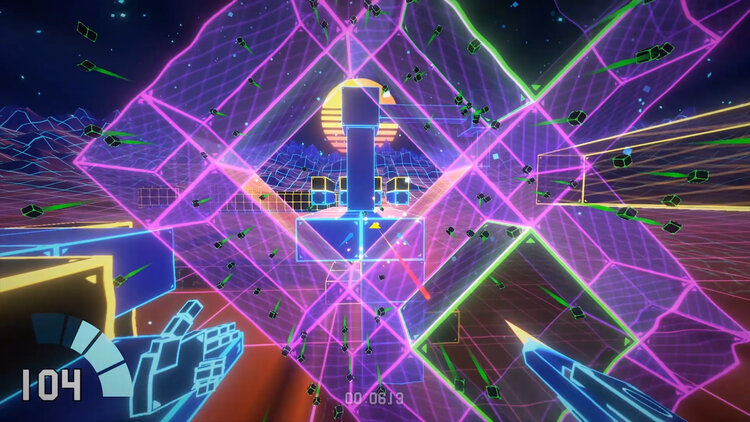 Gameplay in Cyber Hook is straight up addictive. It starts out as Spider-Man’esque ‘web slinging’ fun, and the more you play the more fun (and intense..) it gets. As you work your way up from a novice to getting proficient enough to get through every level there is a very distinct satisfaction you get from maneuvering your way through these courses with greater and greater speed and efficiency. The game IS about going fast, and to this end there are a number of skill barriers to aim for.

Each level has 3-tiers of times to accomplish represented as yellow diamonds, and to get all 3 you will need to finish the course in a fairly fast time. Being that each level is a different obstacle course you will find you are naturally better at some and worse at others. While some levels stick more to a speed or accuracy style design, the ones that combine both are where to difficulty ramps right up. For me personally I found the more ‘web-slinging’ style stages to be to most fun and the ones I completed at the highest tier much faster. The more maze-like levels with ‘no-touch’ zones took me many more attempts to beat and obtaining 3 diamonds on a few of them took my hundreds of attempts. Luckily this is a core mechanic of the game, with a default key binding allowing you to double-tap ‘r’ to instantly reset and have another go without loading time, just a 3-second countdown and you’re running again.

Cyber Hooks replayability is determined solely on how far you want to push yourself towards perfection. Learning the movement will get you 1 diamond on each of the 60+ stages, being good will get you 2, mastering the movement will get you 3 which rounds out the main game. After that you’ve got the Steam Achievements to go for, a level editor to play around with, and if you really get bitten by the speed running bug there is a global leaderboard to compete on that offers downloadable replays of the top 100 runners per level; and let me tell you the top runners are INSANE at the game. 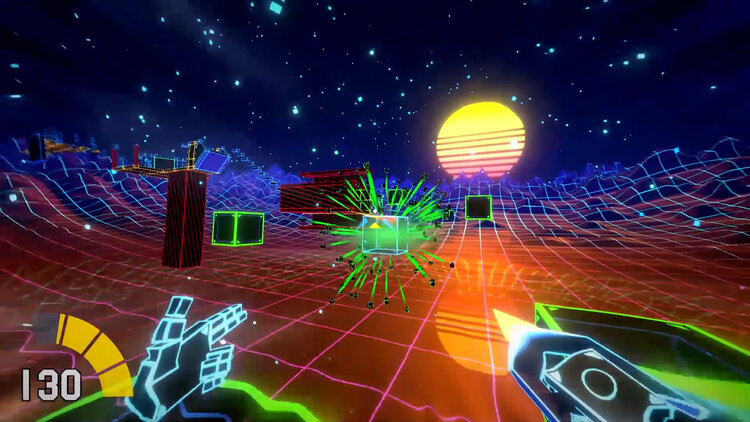 Steams achievements for Cyber Hook are pretty standard and can mostly be collected by playing through the game to completion. They’re not all that hard but do present a challenge that’s very satisfying to complete, and highly obtainable if you’re looking for a great game to add to your perfect list on Steam. From memory there’s actually one ‘bugged’ where the description of the achievement is not actually how you obtain it… and there’s a definite trick to ‘! SONIC BOOM !’. Tip: There’s no level (that I could find) in the game that allows you to reach that speed, you need to do it in the starting area of the game by running one the ground in a large loop. 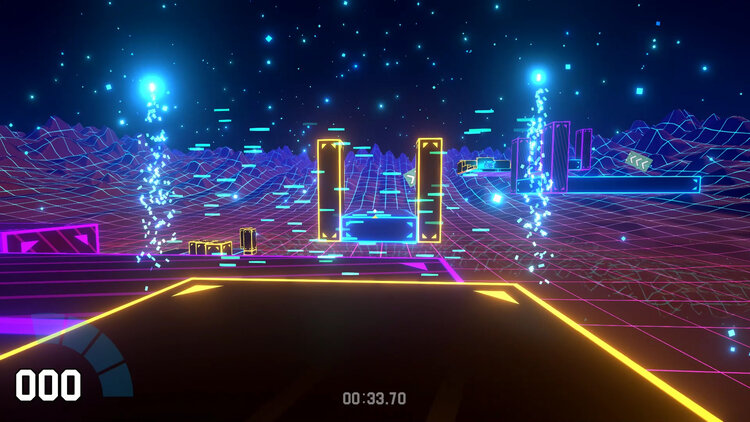 Personally I think $20+ AUD is a little bit rich for this title even though I thoroughly enjoyed it, and would have re-installed it in a heartbeat to play the Lost Numbers DLC that has just been released… except it’s an additional $6.80, and I just don’t see it being worth it for the price VS playtime. It was great fun taking on the challenge, clearing the achievements, and even watching and being amazed at the replays of the very best in the world; but ultimately the ride was all said and done in 15 hours.

If you can pickup Cyber Hook in a bundle or at sale time, or just have a bit of extra spending money and love old school FPS movement mixed with a parkour / speed running feeling, then I absolutely recommend it. I have nothing on fond memories of it, and it certainly deserves more coverage in the gaming community!